I recently listened to the audio book of The Night Circus by Erin Morgenstern and really enjoyed it, it’s completely unlike anything I’ve ever read before. It’s an adult fantasy, almost magical realism, set in part in London, as well as various real cities across the world that the circus visits. It spans over a century, with the main story beginning in the mid 1800s and ending in the early 1900s.

TL;DR two magicians play a dangerous game, pitting their unwitting contestants against each other in a decades-long battle of talent and skill. A miraculous circus that only opens at night, a group of incredibly talented illusionists and performers, and an utterly fabulous clock all combine to make a spectacular fairy tale filled with magic and enchantment.

Where to start! This book has so many layers, so many subplots that combine to make a beautifully complex story. It begins with an introduction to the circus as though you yourself are visiting it right now, in modern day, describing what you see and smell.

Admittedly, the second person present tense was jarring at first, I’ve never read a book that was written that way, but only the framing parts are in second, the rest of the story is written in third. I’ve seen a few reviews where people DNFed because they couldn’t get into the book, and to be honest I can see why some didn’t persevere, but as I was listening to the audio book it was easier to push past the initially uncomfortable parts and just listen until I was completely absorbed by the story.

“The circus arrives without warning. No announcements precede it. It is simply there, when yesterday it was not. Within the black-and-white striped canvas tents is an utterly unique experience full of breathtaking amazements. It is called Le Cirque des Rêves, and it is only open at night.”

We start with Prospero and “the man in the grey suit”, or Alexander, two old friends and rivals who decide to each choose a pawn to play in a mysterious game. Prospero’s own daughter Celia has recently come to live with him after her mother committed suicide, and Prospero quickly realises that she has inherited his magical abilities, a natural talent for manipulating the world around her. Marco on the other hand, Alexander’s playing piece, is plucked from an orphanage and spends years learning how to create illusions, use charms and enchantments, and manipulate the perceptions of the people around him.

“People see what they wish to see. And in most cases, what they are told that they see.”

We then meet Chandresh Lefevre, who Alexander encourages to open a circus, providing them with a game board on which to play their pieces. Marco takes on the role of Chandresh’s assistant, and Celia auditions to be the circus’s illusionist. Neither is aware that the other is their opponent. Both use their own skills and abilities to manipulate the circus and those who are a part of it, including the proprietors and the performers, waiting for the day their challenge begins, unaware that it already has.

“Good and evil are a great deal more complex than a princess and a dragon . . . is not the dragon the hero of his own story?”

They each begin to add to the circus, creating new and spectacular attractions – an ice garden, a cloud maze, a wishing well. Eventually, they both work out who their competitor is, and recognising the beauty of each others’ magic, they fall in love.

“Everything I have done, every change I have made to that circus, every impossible feat and astounding sight, I have done for her.”

There’s a parallel story about a young boy called Bailey who visits the circus as a child and meets Poppet, one of the twins, Poppet and Widget, who were born the night the circus opened and possess magical abilities of their own. When the circus returns years later, he searches for Poppet and discovers a whole new destiny.

“You’re in the right place at the right time, and you care enough to do what needs to be done. Sometimes that’s enough.”

The book is incredibly descriptive, with some long sections that only describe the various tents and features of the circus, such as the amazing clock, rather than furthering the plot, but it is astonishingly beautiful and Morgenstern’s imagination is fabulous. Some of the characters could do with a bit more fleshing out, I would have loved to hear more backstory on some of them, like Tsukiko the contortionist, and Alexander – the most mysterious character in the entire book, but in some ways the lack of backstory adds to the overall mystery.

The origins and limitations of magic are never explained, leaving it up to the readers’ imagination – a lot of things are alluded to in the story and never fully explained. How Marco is able to study magic and learn to wield it, while Celia is born with natural abilities, is just one of the questions we’re left with.

I’m giving The Night Circus 4.5 stars because it was absolutely enchanting, with wonderful descriptions and a fairy tale like plot. The only reason it’s not a five star read for me is because of the confusing format, with changes in person and tense as well as time jumps that leave you wondering how long has passed if you’re not listening carefully.

The mountain of questions I was left with afterwards also stopped this from being five star, some of which are interesting and allow me to wonder, others make me wish there had been more explanation and back story. The ending was definitely unexpected, I’m not sure how I feel about it, I don’t think I would have ended it quite that way, but I don’t feel like I need a sequel, I think the story tied up neatly and didn’t really leave room, unless we focused on Poppet and Bailey’s story.

All in all, it was a lovely listen, and now I’m even more excited to download Caraval, which I’ve seen described as ‘The Night Circus for YA’! Have you read The Night Circus? What were your thoughts? I hear it’s been optioned for a film, but there’s been no announcements yet – I’d love to see it on screen! Who would you cast? 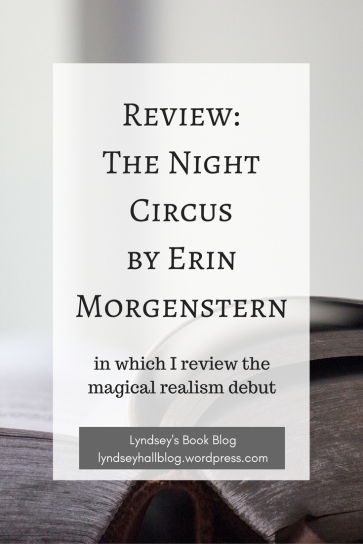